The Education Foundation of the Mississippi Society of CPAs recently awarded $36,000 in college scholarships for the fall 2018 term. Founded in the early 1970s, the Foundation seeks to promote accounting education in Mississippi colleges and universities by helping students pursue a CPA career.

College juniors, seniors, and graduate students representing 10 Mississippi institutions applied for the scholarships, which required submitted essays, transcripts, and resumes. Scholarships worth $2,500 each were awarded to 14 students.

Katelyn Eaton of Petal has a 4.0 GPA in accounting and a 4.0 GPA overall. At Mississippi State, she is involved with many organizations such as Beta Alpha Psi, Accounting and Financial Women’s Alliance, Order of Omega, The National Society of Collegiate Scholars, The Society for Collegiate Leadership and Achievement, and Kappa Delta Sorority. She was a student worker for the Department of Computer Science and Engineering and has also worked as a Graduate Assistant for the Adkerson’s School of Accounting. Katelyn was selected as one of Adkerson’s Outstanding Graduating Seniors and was selected to serve on the Adkerson School of Accountancy Student Advisory Board. She received the Frank Jackson Accounting Graduate GAP Scholarship, the MSCPA Outstanding Accounting Major award, and was on the President’s List all eight semesters of her undergraduate degree. She has interned at York Development in Hattiesburg as well as KPMG in Memphis, Tenn. Outside of college, she has served at Sally Kate Winters Home where she mentored foster children by playing games and helping them with homework. She is also involved at Pinelake Church-Starkville.

The Ralph F. Neely Scholarship was established in 2016 to honor Mr. Neely who was an original Trustee of the Education Foundation when it was founded. Mr. Neely served as MSCPA President during 1966-67.

Aubrey Sanders of Hattiesburg has a 3.75 GPA in accounting and a 3.86 GPA overall. At Southern Miss, she is involved with many organizations such as Beta Alpha Psi, Beta Gamma Sigma, Phi Kappa Phi and Lambda Sigma honor societies, serving as the Lambda Sigma treasurer. She was also a Student Government Association freshman associate member and an Honors College ambassador. During her undergraduate studies, Aubrey received a presidential scholarship and studied abroad on an exchange program in England. Outside of college, she was counselor and youth camper coordinator for the Abbie Rogers Civitan Camp in Hattiesburg. Aubrey completed an audit internship with KPMG in Jackson and has accepted an offer for a full-time position with the firm for fall 2019.

The Rhyne E. Neubert Scholarship was established in 2016 to honor Mr. Neubert who served as a Trustee of the Education Foundation until 2016. Under his investment guidance and expertise, the Fund grew from an original contribution of $1,000 to its level today. Mr. Neubert served as MSCPA President during 1972-73 and was honored by the MSCPA in 1996 as the Public Service Award Winner for outstanding service to his community.

Kellie Shannon of Madison has a 4.0 GPA in accounting and a 4.0 GPA overall. At Ole Miss, she is a member of the Sally McDonnell Barksdale Honors College, Gamma Beta Phi, Phi Kappa Phi, and Beta Gamma Sigma. She is also a member of Beta Alpha Psi where she serves as the service project director and participates in volunteer projects including accounting tutoring. She also works as a calculus and college algebra tutor for the university’s mathematics department and participated in KPMG and PwC case competitions. Kellie also volunteers with the Office of Student Disability Services, Green Grove Initiative, and Ole Miss Big Event. Outside college, she volunteers as an assistant Sunday school teacher with First Baptist Church in Oxford and is a member of Grace Chapel Presbyterian Church in Madison. Kellie completed an internship with KPMG in Jackson in the spring of 2018.

The Edward A. DeMiller, Jr. Scholarship was established in 2016 to honor Mr. DeMiller who was an original Trustee of the Education Foundation when it was founded. Mr. DeMiller, who died in 2014, served as MSCPA President during 1959-60.

A’Ravian Sharkey of Greenville has a 3.875 GPA in accounting and a 3.98 GPA overall. At Jackson State, she is involved with Honors College Council, Alpha Lambda Delta, National Society of Collegiate Scholars, Who’s Who Amongst Colleges & Universities, and the Accounting Society.  A’Ravian is a member of the National Association for Black Accountants. She also volunteers as a tutor at Blackburn Middle School and as a youth teacher at Greater Destiny Fellowship Ministry. A’Ravian completed internships with KPMG and has accepted an offer for a full-time position with the firm for fall 2019.

The Gary E. Thornton Memorial Scholarship was established in 1999 by Gary’s widow, Cathy. Gary was an active MSCPA member and former chair of the Governmental A&A Committee. He died in March of 1999.

The prestigious Hamp King Award is given to the most outstanding undergraduate scholarship recipient. This award was established to recognize and honor the memory of the late Hamp King, a CPA who served as Mississippi’s State Auditor for many years. The winner is invited to the Mississippi Tax Institute conference on December 6, 2018, at the Hilton-Jackson to receive the award along with an additional $1,000 scholarship to be given by the Institute.

Fatima Bracamonte of Madison has a 3.17 GPA in accounting and a 3.68 GPA overall. She is active in campus organizations including Undergraduate Women in Business, Accounting and Financial Women’s Alliance, Empowering Minorities in Accounting Association, and is an ambassador for the College of Business. She is also a New Maroon camp counselor. Fatima completed an internship with Trustmark’s Wealth Management and Compliance Department in the summer of 2018.

Breonna Dear of Jackson has a 3.8 GPA in accounting and a 3.8 GPA overall. She is active in campus organizations including Tau Sigma National Honor Society serving as Secretary, the Accounting Society, and the VITA Program. Outside of college, Breonna is very active in her church.

Arielle Marie Dauber of Columbus has a 4.0 GPA in accounting and a 3.91 GPA overall. She is involved in honor societies including the National Society of Leadership and Success, Phi Kappa Phi, and Delta Mu Delta. Outside of college, she volunteered with Angels on a Mission and various Boy Scouts events alongside her brother.

Rebecca Falls of Minter City has a 3.83 GPA in accounting and a 3.79 GPA overall. She is active in campus organizations including Kappa Delta Sorority (President, VP-Community Service), Circle of Sisterhood Committee, Foundations Leader, Canterbury Club, Women’s Soccer Team, and was a student worker for the Athletic Department. She is also a member of Phi Eta Sigma, Sigma Lambda-Secretary, Beta Alpha Psi, Order of Omega-Treasurer, and Beta Gamma Sigma. She has studied abroad in Europe, Vietnam and Cambodia. Outside college, she has worked with Lott Fuller & Associates and Viking Range, LLC and has volunteered with Camp Bratton Green.

Abigail Bacot Fraley of Vicksburg has a 3.93 GPA in accounting and a 3.95 GPA overall. She is active in campus organizations including the Business Services Club-Secretary, Reformed University Fellowship, Reformed University Fellowship International, Student Advisory Board, Women in Business, Delta Mu Delta, and Phi Theta Kappa. Outside college, she volunteers as a stage director with Riverpointe Dance Academy, and as an English tutor with the Local Saudi Arabians. She completed an internship with Trustmark National Bank. She is active with Redeemer Presbyterian Church in Jackson and is a conversation partner with the Office of Global Education.

Seth Murphy Lawrence of Madison has a 3.63 GPA in accounting and a 3.55 GPA overall. He is a tutor for the Business Department and works for the Student Services Office as a personal scribe. Seth is a student member of the AICPA.

Jeremy Lockhart of Moorhead has a 3.8 GPA in accounting and a 3.65 GPA overall. He is a member of Delta Mu Delta serving as Treasurer. He is also involved with the Student Support Services as a tutor for accounting and math majors.

Carl Upton of Jackson has a 3.88 GPA in accounting and a 3.81 GPA overall. He is active in campus organizations serving as AASB President of the Patterson School of Accountancy as well as Director of Logistics for the Ole Miss Big Event. He is a member of the Sally McDonnell Barksdale Honors College, Sigma Chi Fraternity, Haley Barbour Center for Manufacturing Excellence, Reformed University Fellowship, Phi Kappa Phi, Lambda Sigma, Freshman Council and the Ole Miss Club Ultimate Frisbee Team. Carl is affiliated with Boy Scouts having achieved Eagle Scout. He is also a member of Pear Orchard Presbyterian Church.

Jenna Van Dan of Summit has a 4.0 GPA in accounting and a 4.0 GPA overall. She is active in campus organizations including Beta Alpha Psi, Beta Gamma Sigma, and Phi Kappa Phi. Jenna has tutored fellow undergraduates in accounting as part of the Student Success Center. She has also attended several accounting firms’ summer leadership programs. Jenna is an active member of First Baptist Church of Summit.

Alexander S. Miller of Natchez has a 3.43 GPA in accounting and a 3.72 GPA overall. While at Ole Miss, he served as the Treasurer of the Investment Club and participated in the Tennessee Valley Association Investment Challenge. He is a member of Beta Alpha Psi and Phi Kappa Phi Honor Society. Outside college, Alexander is affiliated with Boy Scouts having achieved Eagle Scout in 2015.

The Bill Rush Mosby, Jr. Scholarship was established to honor the late Bill Rush Mosby, Jr. of Natchez. He served as MSCPA President in 1977-78 and was honored by the MSCPA in 2000 as the Public Service Award Winner for outstanding service to his community. This $1,000 scholarship is awarded each year to an undergraduate accounting major from the Natchez (Adams County) area. 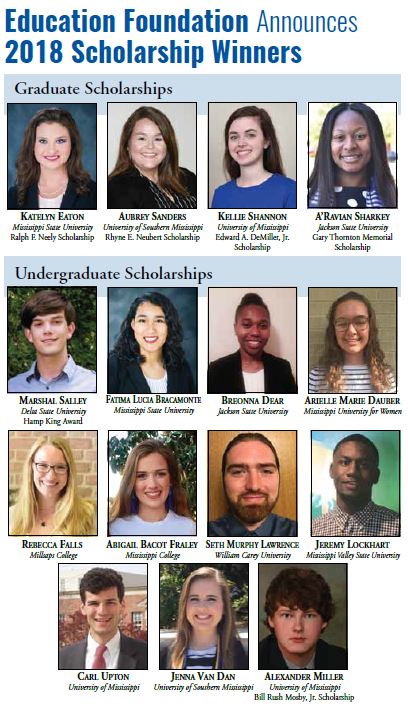